"Every Child is a Story Yet to be Told."

I'm Lina and I come from Malmoe, which is the third capital of Sweden. I’m 27 years old and I have an amazing family: my parents, Ingrid and Sune and my two sisters, Boel (34 years old) and Ellen (29 years old). I have a little niece, Michaela and she was born on the 1st January 2014.

I was born on the 1st October 1986. I was 51 cm(20 in) long and weighed 3900 grams(8.5 lbs). I had black hair and ice blue eyes. My parents were overjoyed that they had three beautiful daughters. They thought it would be fine for me. But when I was two weeks old I no longer wanted to eat. I threw up everything, and my parents worked hard to make sure I would survive.

When I was a month, the doctors discovered that I had serious heart defects. I had a large hole between the atria and ventricles. The doctor didn’t want to operate on my heart because I had really bad blood coagulation, and they thought the hole would heal itself.

I continued to vomit so my parents reached out for help. I moved into the hospital and stayed for three months to survive. After three months, I came home with an ng tube in my nose. The doctors didn't think I would live to my one-year birthday: but I survived! My parents knew I wanted to survive, and not leave my family.

My parents found out I was deaf when I was one year old. My whole family learned Swedish Sign Language. I started to walk when I was 2 ½ years old. But then my parents again discovered I was different than my sisters.

I will now tell you about my schooling. It was one of the toughest experiences. I started going to the school for the deaf when I was seven years old. I already knew that I wasn’t like the other pupils. I struggled a lot and wanted to have the help of the teachers, but I didn’t get much help from them. I got a lot of help from my parents. Not all teachers believed in me but I believed in myself!

One of the worst parts of school was the bullying. The pupils bullied me when I started at the school for the deaf. The bullying never stopped, but I was stronger every day. I learned to win my own battles by the time I was finished with elementary school.

After four years in high school, I moved back to my beloved family. I looked for different jobs but I found nothing. I began studying to nurse in intensive level. It was so tough but I did it! April 2009, I found a job at retirement home for deaf and deaf-blinds, but it wasn’t a steady job. After 1 ½ years without a steady job, I started to struggle to get a steady job at the retirement home. I never gave up, until August 2012, I won my fight for work and I got a steady job there!

I now live by myself in my own apartment. I bought my apartment in the fall of 2011. I love my apartment! I don’t need have help with anything. I can do it all by myself. I learned when I lived in Orebro. My life with NS is so tough but it's so amazing anyway! I won many battles and now I’m very happy! I survived two major surgiers (heart, April 1996 and tooth, January 2004). I feel that I'm a true warrior!I feel I can love myself and think that I am a beautiful woman! 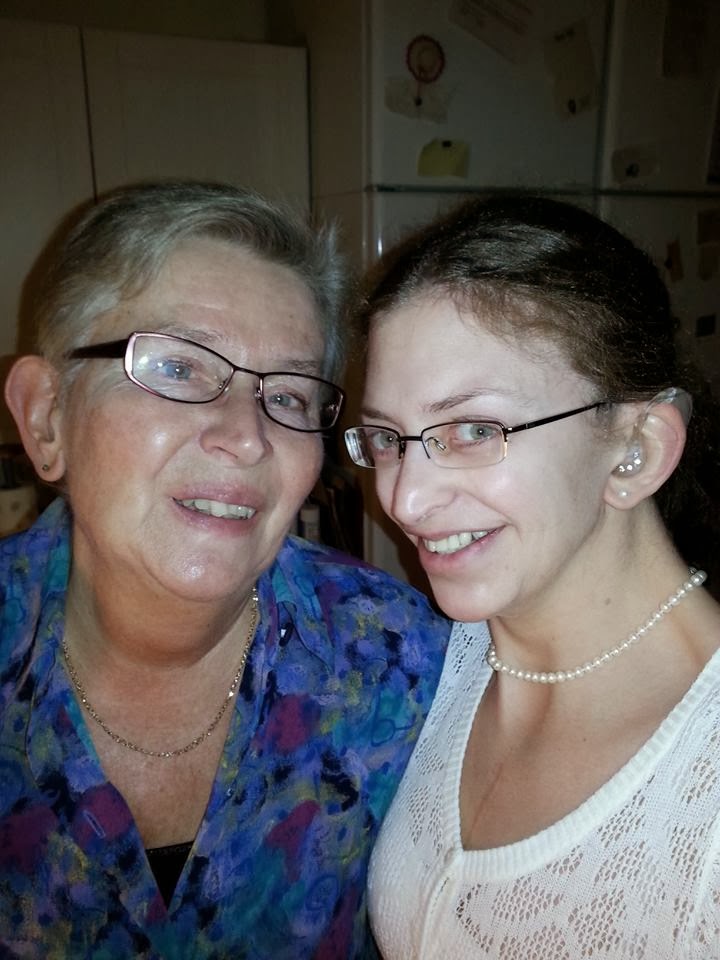 After my parents found out I had Noonan syndrome they looked for an association, but they discovered that there was nothing specific for Noonan Syndrome in Sweden. We thought we were alone. But it wasn't long before we found a place called Agrenska in Gothenburg. Agrenska provides programs for children, youth and adults with disabilities, their families and professionals. In the Summer of 1996 my mother, my sister and I met other children with Noonan Syndrome in Agrenska--we realized that we weren't alone! It was an amazing time for us.
After our experience in Agrenska my mother began to think about how life would be if there wasn't a Noonan Syndrome association in Sweden. In autumn 1996 she sent an application to form an association. She found another person who had a grandchild with NS and together they formed the Noonan Syndrome association of Sweden, with our first annual Noonan Syndrome conference in 1997!

My mother formed the association so we wouldn't feel alone! She is an amazing mom to have been so thoughtful. She worked very hard to make sure the association would be a success. In the beginning we didn't have very many members, but today we have 250 members, including parents and siblings! It is so amazing.

My mother was on the Noonan’s board until last summer--serving families for seventeen years. My mom is now with another organization called, "Rare Diagnoses Sweden." All members in our association say that my mother is the most important person in our association. She helped them so much. I remember when I lived at home she would sit and talk on the phone for many hours, encouraging and supporting other families! She has an absolutely big heart, and she usually has time to talk about anything I need!
A lot of love from Lina


Until recently I had very low self-confidence. I didn’t feel I could help others who are struggling with the diagnosis. My psychologist in the school for the deaf tried to help me but it didn’t work. I worked very hard on my self-confidence. My parents also helped me very much. When I was in Orebro, one of my friends realized I needed some help.
In Obrero I found a very good psychologist whom I connected with—that I really could talk to about my life with NS. One day my psychologist said to me that I must have a tool that I could use to help deal with my feelings. I worked so hard for me to be happy and proud!
At 20 years old my self-confidence became stronger--I love my diagnosis more than ever and I am very proud of myself! I knew I could start helping other children and youth, and their parents too. It was an amazing moment when I realized I could start helping others. I have changed a lot after Orebro. I have continued to help others.  In February 2012 I found out I was nominated for David Lega's scholarship. 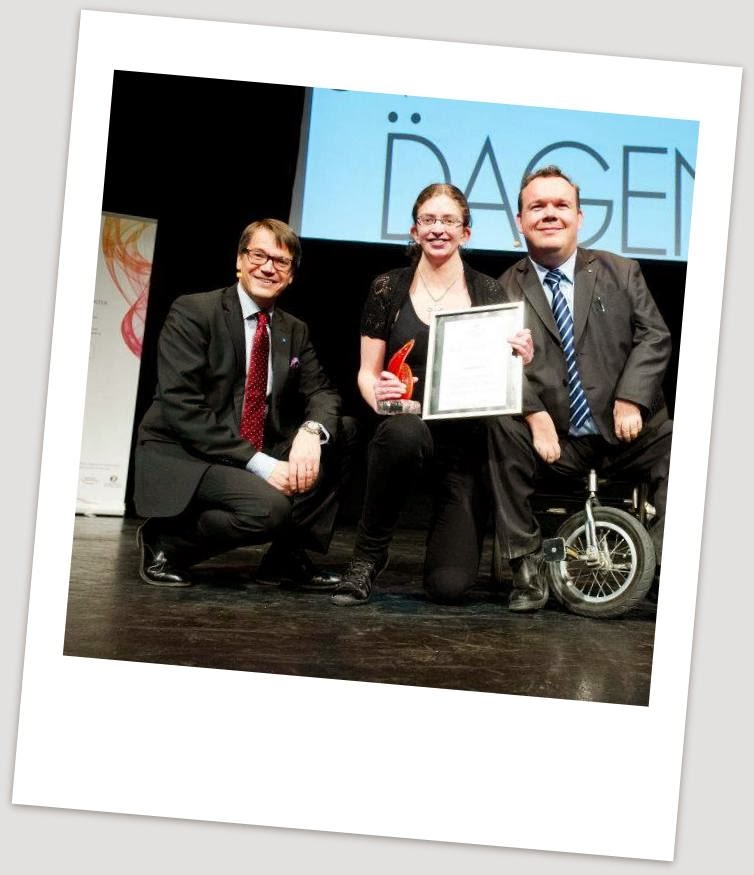 David Lega’s scholarship is given to "a young person who has a rare diagnosis, or siblings or other relatives of a person with a rare diagnosis, and who by their voluntary commitment appears as an inspiration and role model". There were ten people in the nomination list. I was the only one deaf on the list. At first I thought that I would obviously win because I'm deaf, I moved alone to Orebro, and I fought and never gave up. I have a steady job at the retirement home for deaf and deaf-blind people where I give them a greater quality of life! But when I sat in the audience I thought, "no, I have no chance. They are stronger than me”. But when our Swedish Social Affairs, Goran Hagglund said my name I was really shocked and thought "No, no, not me!" My mother said, "Lina, it is you! Get up from your chair!”. Both my parents burst into tears saying, "Lina, we love you!". I won the scholarship and 25 000 Swedish crowns too. I gave a nice speech to the audience about my life with NS, my job and other things. That speech helped me begin my life as a role model for others! I thanked my family and friends who helped me so much. I was so grateful!
After receiving the scholarship I became more powerful than ever, and I want to continue helping others with NS, and their parents. I’m passionate about my job to help others! They need my help. I can’t leave them now. I also want to help other children, youth and parents from other countries, not only in Sweden. That's the reason that I’m in the group, "Noonan Syndrome Family" and I’m always here if you need to talk or have support.

A lot of love from Lina

The article above was written by a guest blogger. The opinions and ideas written belong solely to the guest blogger. The RASopathies Foundation and Noonan Syndrome Foundation DO NOT endorse political candidates and religion or religious preferences.
This blog is provided for moral support purposes only. This blog is not a substitute in any way for medical advice, diagnosis or treatment. Always seek the advice of your physician or other qualified health provider with any questions you may have regarding a medical condition. Never disregard professional medical advice or delay in seeking it because of something you have learned from this blog.
The Foundation's do not recommend or endorse any specific tests, treatments, physicians, products, procedures, opinions or other information that may be mentioned in this blog. Reliance on any information provided by the Foundation, Foundation volunteers, staff or guest blogger/s is solely at your own risk. You should not rely on information you receive from or through the blog for any personal, medical or health decision, but should consult with a qualified professional for specific information suited to your family member’s case.